On Writing the Social Media Marketing Blueprint for Lawyers

By now hopefully you know about my upcoming book: The Social Media Marketing Blueprint for Lawyers. It is scheduled to be published this fall, and I'm scheduled to speak to bar associations across the country this winter and next spring to preach the gospel of social media to lawyers and law firm administrators. 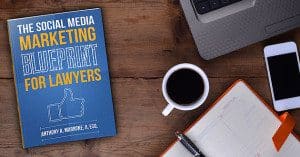 What you probably don't know is how this idea came to be packaged into a book, and how I was able to pull it together while maintaining a growing law practice. I'm going to give you a little bit of a behind-the-scenes look here. The book initially started as a summer research project for an intern. At the time I was building my law practice and our presence across multiple social media platforms. It was a lot to manage by myself, and I was relying more and more on others to help generate content to post.

One morning I was out on a long run in my neighborhood and I thought that if I was struggling to pull all of my social media research and tools together and use them to efficiently manage my law firm's social media presence, surely other lawyers were facing similar predicaments.

Coupled with that is the fear a lot of attorneys have of not knowing how to use social media, or what ethical pitfalls the various platforms might present, and it is enough to erect a giant roadblock to entry to social media for many attorneys. At that point, I knew the solution was to write a how-to manual to get attorneys started on the journey.

From there, I came up with a rough outline of how the book would unfold, basically an in-depth exploration of the major platforms, followed by how to apply each platform to various deployment strategies, including paid advertising, giveaways, offers, email marketing strategies and developing a plan to tie it together. I knew we had to have an expansive discussion of how to ethically do all this as a licensed attorney, and that's right in the front of the book.

Once my outline was complete and buttressed with research, I began to tackle one chapter at a time. Some chapters were long, but easy to write because my passion for them was obvious and my experience extensive(i.e. Facebook). Some were more difficult and I really struggled through (I'm looking at you, Snapchat). Several drafts and revisions later, we have a book on the way to being published and hopefully purchased by attorneys across the country.

One fear I've had throughout the process is that the constant shifting landscape of social media could render the book outdated quickly if a seismic shift occurs.

I was recently describing to one of my colleagues the day I remember being notified of the existence of a new website called theFacebook.Thats right, I was lucky enough to be in college at the same time Mark Zuckerberg and his crew were first rolling out the newest social media platform to campuses across the country. My colleague was shocked when I told her that I had to sign an online petition to try to get our campus access to theFacebook. She was even more shocked it was called theFacebook.

What struck me most about this conversation was not how old I felt, but rather how far social media has progressed in such a short amount of time. There was a time when I was 20 years old where young kids were clamoring to get onto this cool, new website, theFacebook. Now, some 12 years later, the youngsters seem to have moved away from Facebook (they dropped the from the name about 11 years ago) in favor of hip, new photo-sharing platforms including Instagram (smartly purchased by Facebook in 2012 for $1 billion)and Snapchat.

This is the perfect analogy for my fears about the book:how frequently will I need to update this thing? No sooner had I finished a set of revisions to the manuscript and Instagram debuted a totally new feature taking the social media world by storm called Instagram Stories. My blog post about the feature can be found here. I don't want to constantly have to revise the book for every little tweak. And that's where the beauty of modern technology comes in. We're simultaneously giving everyone who purchases the book access to the ebook. For everyone who redeems the ebook, we're going to provide updates to the ebook as major changes happen in the social media world. That's not to say I won't update the physical book in the future, but email updates to the ebook will be a more efficient way to keep those who have invested in my book in the loop with the latest changes.

What I learned through trial and error, and what I hope to teach other lawyers, is that using social media successfully, first and foremost, requires good storytelling. That will not change, despite what happens with the technical updates to social media platforms. The themes in my book, weaving narratives on social, pushing content back-and-forth between platforms, and building your social media clique to drive brand awareness are universal, and I think, timeless.

Despite the ever-changing nature of social media, the one constant is that what is primarily required in the context of building and growing your own social media following is patience. You will not build a following of 25,000 devoted fans overnight. Your Facebook post about how you achieved a six-figure settlement for a personal injury post will probably not go viral. You know what goes viral: cat videos (I may or may not try to work in some cats to my next video posts). The book seeks to provide attorneys with the toolsI have acquired and am still developing, which we know will be ever-changing.